Skip to main content
! Warning This document has not been updated for a while now. It may be out of date.
Last updated: 20 Jun 2022

The Transition system is built to transition government websites to GOV.UK. The main work around this happened in 2014, but we still take on websites.

All the repositories involved in transition have been tagged with govuk-transition on GitHub. 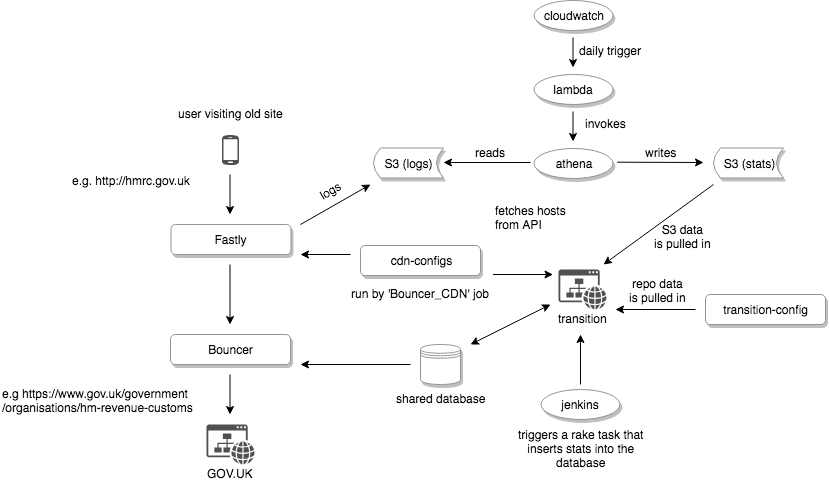 Site configuration is automatically imported every hour via a Jenkins job from transition-config.

Traffic data is automatically imported every day via a Jenkins job. This import puts a high load on the database. CDN logs for the “Production Bouncer” Fastly service are sent (by Fastly) to the govuk-production-fastly-logs S3 bucket and processed by a lambda function defined in the infra-fastly-logs Terraform project.

Bouncer is a Ruby/Rack web app that receives requests for the URLs of government sites that have either been transitioned to GOV.UK, archived or removed. It queries the database it shares with Transition and replies with a redirect, an archive page or a 404 page. It also handles /robots.txt and /sitemap.xml requests.

When sites transition they are generally CNAMEd to a domain we control that points to our CDN (an A record is used for root domains which can’t be CNAMEd).

Some sites partially transition, which means that they redirect some paths to their AKA domain, which is CNAMEd to us.

GDS doesn’t control the DNS for most transitioned domains, except for some domains such as *.direct.gov.uk, *.businesslink.co.uk, *.alphagov.co.uk. If the DNS for a particular transitioned site isn’t configured correctly we need to inform the responsible department so they can fix it themselves.

Bouncer has a separate CDN service at Fastly (“Production Bouncer”) from the main GOV.UK one, and it’s configured by a separate Jenkins job which adds and removes domains to and from the service. That job fetches the list of domains which should be configured at the CDN from Transition’s hosts API, so will fail if that is unavailable.

Bouncer runs on 3 machines in the redirector vDC (bouncer-[1-3].redirector), and they are load-balanced at the vShield Edge rather than by a separate machine. Bouncer’s traffic does not go through the cache-* nodes - the CDN proxies all requests to bouncer.publishing.service.gov.uk which points to its vShield Edge.

It uses an Nginx default vhost so that requests for all domains are passed on to the application; there’s generally no Nginx configuration for individual transitioned sites (but see Special cases below).

In the case of a data centre failure, within the disaster recovery (DR) vCloud organisation we have:

Bouncer is a small application, and so long as its dependencies are present the only thing to do if it’s erroring is to restart it.

Bouncer reads from the transition_production database by connecting to transition-postgresql-slave-1.backend. It authenticates using its own postgresql role which is granted SELECT permissions on all tables by Puppet, and that role is further restricted to connecting only to the slave because the pg_hba.conf rule to allow it isn’t present on the master.

We serve some assets which were previously on directgov and businesslink via Nginx on the Bouncer machines. The assets live in two repos which are fetched and rsynced to the machines when Bouncer is deployed.

Bouncer in late 2020 began supporting HTTPS for transitioned sites, through a new feature in Fastly.

Follow the guidance to request a Fastly TLS certificate.

More in the Transition section